Replacement of settling tanks to increase volume and quality of the treatment.  The work included removal of the old tanks and replacing with two 25,000 gallon tanks to allow for more volume and settling capacity. Construction required phasing to maintain operation during construction.

The existing tanks were found to not be sufficiently settling out the solids and replacement of these tanks was needed. The existing systems and facilities were reused as much as possible to lower costs while still improving the function.

Issue: Operation of the system had to be maintained throughout construction.
Solution: Phasing and tight coordination between the Sewer Commissioners, Selectman, Engineer, and GW Brooks.  Through properly timed pumping of system and swithches from one tank to the other there was no time that the system was not functioning.

Issue: Insufficient slope of the existing line leading to the Settling Tanks had caused solids to build up in the line.
Solution: The line was dug up and replaced with proper pitch.  This additional work should greatly increase the functionality of the improved system.

Issue: As the property is directly adjacent to the Sandwich Fairgrounds and the staging area was within the Fairground Parking Area scheduling to avoid inconvenience to the Fair was very important.
Solution: Even with the delays incurred due to unforeseen circumstances work progressed with overtime and weekend work in order to meet the deadlines of the fair. 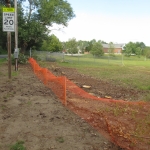 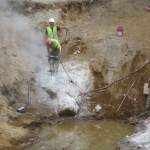 Ran into Ledge during construction. 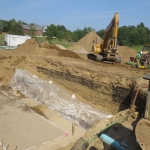 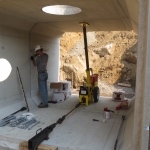 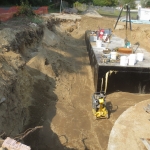 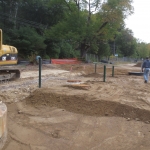 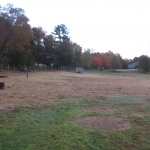