The Project involved the site work for a new family medicine facility. The Project entailed the overall grading of the site, excavation for the building, parking lot installation, and other associated site work tasks. A particularly unique feature of the project was a large drainage swale running down the north side of the project.

The Project is sited along the highly visible Route 16 corridor in Tamworth, NH near Chocorua Village. The site was the former home to a reclaimed gravel pit. Part of the planning for the project was to allow for future expansion of the facility. This future expansion took place 4 years later and we were chosen to be the site work contractor for this work as well.

Issue: There was an extreme rain event that caused massive erosion along the northern edge of the project.
Solution: After the extreme rain event it was realized through a study performed by White Mountain Survey that additional erosion control measures were needed. To fulfill this need a large stone lined swale was designed and constructed to minimize the chance of future erosion issues. 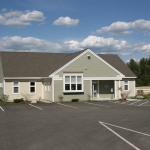 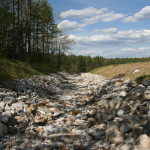