Installation of a Replacement Septic System for a failed system.  The work included pumping and filling the old steel tank and installing an Presby EnviroFin Septic System.

The existing system was declared failed during a home inspection and in need of fixing in order to sell the home.  The original system was installed over 30 years ago, the tank was made of steel and was under sized for the current regulations  for a 3 bedroom home.

Issue: Bennett Brook ran through the property, in close proximity to the home.  There were other wetlands on the other side of road, making it hard for the system to meet the setbacks for the Town of Freedom.
Solution: A variance was needed from the town in order to submit the redesign to the State of NH, to allow for the setbacks from the tank and leach field to be minimum distances.  In addition to the setback variances, the limited area necessitated the use of the new PresbyFin system which has reduced setback needs. 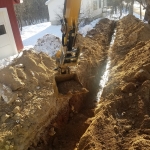 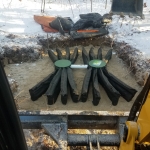