Work involved replacement of an aging water system at a National Forest Campground.  The waterline stretched for nearly 6,000 feet in total and was replaced with HDPE Fusion Pipe.   The pipe run included a NHDOT road crossing of the Kangamangus Highway that required a directional drilling.  This work was the first major upgrade to the campground in many years and paved the way for future upgrades with a modern water delivery system.

The existing water system was constructed of PVC Waterlines which were installed in the 1960’s.  These pipes had become very brittle with age and needed replacing before catastrophic failure occurred.  Work was scheduled to coincide with the winter shutdown of the campground in order to have the least impact to the campers.  The project was a collaborative effort between the Owner (USFS) and the manager of the campgrounds (ProSport Inc.).  This collaboration provided improvements to the campground that were much needed and well managed.

Issue: Cross a NHDOT Highway that open trenching would not be allowed.
Solution: Directional Drilling was conducted under the roadway to avoid and closing or disturbance to the roadway.

Issue: Working within the US Forest Service Lands requires sensitive approaches to how many trees are cut and how wide the disturbance is.
Solution: Use of zero tail swing excavators and very skilled operators disturbances through the woods portions of the job were limited to less than 20′ wide.

Issue: As an active and popular campground closure had to be limited as much as possible.
Solution: Work was conducted during the late fall through the early spring.  As the 2015 spring was late coming and there was substantial work needed prior to reopening, G.W. Brooks threw the entire company at the project to make sure the campground opened on time. 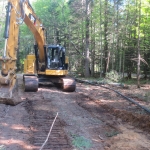 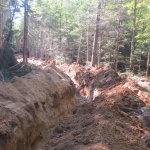 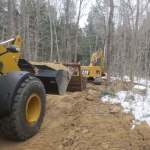 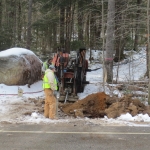 Boring across the Kancamagus Highway 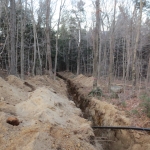