Installation of a replacement septic system for a failed system.  The work included removal of the failed system and replacement with a larger system for site and usage conditions.  Special care was needed for scheduling within a tight schedule based on the hotel’s needs.

The existing system had failed and was in need of replacement.  The facility has had many additions over the years which have resulted in multiple systems, this allowed for some of the facility to remain open during construction.

Issue: High occupancy during most of the year would require careful timing and a quick turnaround time from the start of construction till the system could be used.
Solution: The work was scheduled during the only timeframe that would see a slight reduction in occupancy; between the busy summer and fall foliage seasons. 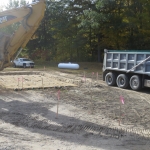 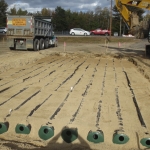