With insufficient gravels under the existing pavement the parking lots and driveways had significant cracking and deformation. In addition to the pavement issues there was also a need to update the existing drainage system. With the update of the drainage system there was a need to rebuild some drainage structures and add poly inlet liners to extend the life of the structures. In addition to the repairs to the existing system, several new Catch Basins were added to alleviate surface water issues near the buildings.

With the property sitting on sandy soils with very little gravel under the pavement the traffic of trash trucks emptying the dumpsters onsite had caused significant rutting in the pavement. With salt use on the parking lots and driveways the existing structures had deteriorated to the point of failure in several structures. There was also issues with the walkways to the units being flooded out due to sinking of the walkways.

Issue: Sagging and cracking of the existing pavement.
Solution: Existing pavement in most portions of the property were removed and underlying materials removed. Crushed Gravel was installed and then paving was restored, this method should provide an excellent foundation for the future.
Issue: Concrete erosion by salt within the drainage structures.
Solution: Excavation around the existing structures. Where practical repairs were made to the existing structure and poly inlet liners installed to reduce the salt erosion on the throat of the structure. In some situations the structure was too damaged and required complete replacement. 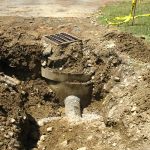 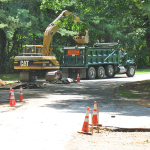 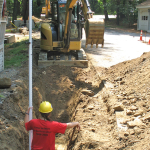 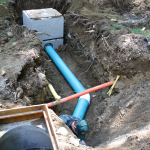 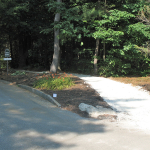 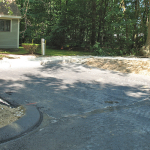 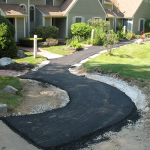