The Project called for 2 foundations be dug and associated site work for 2 new camp buildings. The Project required clearing and grubbing, site grading, and other associated work to prepare the site for the new buildings which would be built separate from our contract. In addition to the buildings there was a need for a combined septic system be installed for them. While constructing the septic leach field for the 2 current project buildings there was future planning for 2 additional buildings. To accommodate this future plan a second leach field was built immediately adjacent to the first.

Through the years Camp Calumet has regularly turned to G. W. Brooks and Son, Inc. for their site work needs. Following a Master Plan that they have in place Camp Calumet has progressively built out their infrastructure and capacity to accommodate their ever growing list of visitors. This Project was another step in their plan which consistently builds off of previous phases

Issue: Continue to use the available land efficiently and minimize future waste.
Solution: Following the Master Plan the structures and the utilities that service the structures were placed in locations that would not interfere with planned future expansion.

Issue: Future plans call for 2 additional buildings to be constructed within close proximity to the site of this project.
Solution: Install 2 separate but adjacent leaching fields, one for the current project and one for the future expansion. 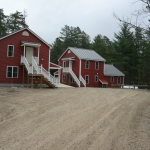 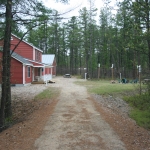 Side Entrance to Duplex Buildings 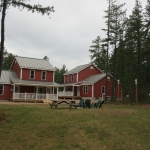 Outdoor sitting area in between both Duplex Buildings