The 2 Projects began with a Home we were completing the site work on, for Leonard Builders, LLC. The first home required the clearing and grubbing, overall site regrading, excavation for the new home, boulder retaining wall installation, septic system, and a switchback driveway to accomplish the extreme grade change. The location presented problems with groundwater as well as overall steepness of the terrain. In completed this project the homeowner next door was impressed with the boulder retaining walls installed and contracted us to remove existing boulder retaining walls and rebuild them. The second project like the first involved steep terrain but less in the way of groundwater issues. This project involved the reconstruction of the boulder retaining walls, regrading of the driveway, and installation of underground propane tanks for easier access closer to the road.

The 2 homes are set on a mountainside in Madison with spectacular views to the North and West of Mount Chocorua and the entire Presidential Range. Careful attention was needed to get the first home sited where it would be able to maximize these views.

Issue: Groundwater and surface water were prevalent on site and would over time deteriorate the driveway.
Solution: A series of under-drains, drainage swales, catch basins, and drainage pipes were installed to direct water away from the home and the driveway. 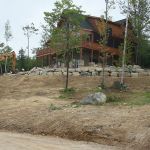 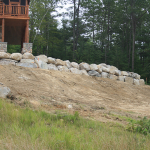 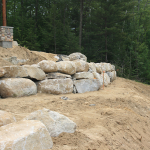 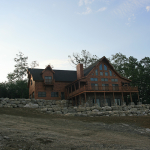 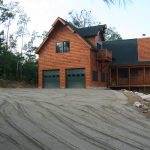 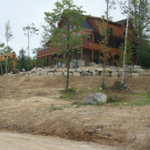 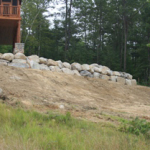 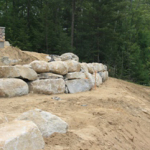 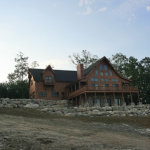 A view of the completed boulder retaining walls 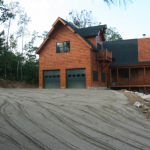 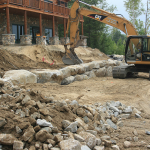 Reconstruction of the walls to correct structural issues