The Project began as an addition to the existing home. Once excavation began the project was expanded to excavation of the existing stone foundation and creating space for a full crawl space under the home. The Project required careful excavation due to tight spaces between a second home behind the home being renovated and nearby barn.

The Project was on a home that had some historic significance to the area which was why the owner was looking to renovate the existing building rather than rebuild. The massive central fireplace was one of two within neighboring homes. With the historic significance there was much concern and emphasis placed on minimizing the disturbance of the site and home during the project.

Issue: Limited space for work and storage of materials.
Solution: With the limited space all materials excavated were required to be trucked to a lower staging area on the job site to provide for as much working area as possible adjacent to the home. 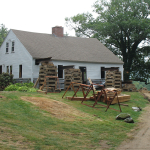 House is jacked up and ready for excavation 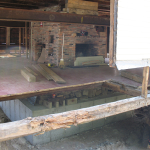 A view of the massive central chimney, 2 sides of the old foundation removed 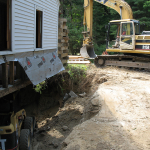 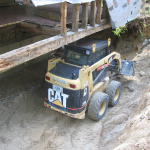 Final cleanup of the subgrade 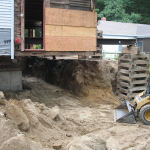 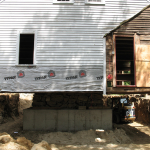